Ridgefield is located between Crystal Lake and Woodstock, Illinois, less than a mile off Route 14 on Ridgefield Road. Or, take the scenic route, and enjoy one of only eight routes designated as Scenic Roads in McHenry County!  Hillside Avenue (accessed via Terra Cotta Avenue in Crystal Lake) will take you through 3 and 1/2 miles of beauty!  From Route 176, turn north onto Terra Cotta road.  Then, turn left at Hillside road (at one point you'll need to veer right to stay on Hillside).  Take Hillside until it ends at Country Club Road.  Turn left and left again at the first street (Railroad).  Railroad Street Market is the second building on your left.  Our other three shops are across the railroad tracks.  From Railroad Street Market, turn right immediately after you cross the tracks onto Ridgefield Road and you'll see Simone-Michele, Country Church and The Peacock Shoppe of Ridgefield on your left.  More information about the Scenic Road is at this link. 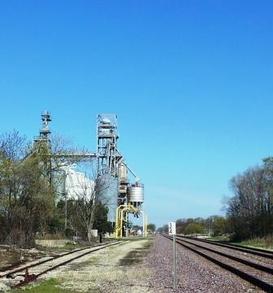 The first settlers of Ridgefield arrived between 1835 and 1840, making it one of the oldest settlements in McHenry County.  Many original settlers were from Virginia, so the area was originally known as The Virginia Settlement.

By the 1850s, the Chicago & North Western Transportation Company railroad came through the settlement, enhancing its value as a crossroads.  During this time, J.R. Mack, a railroad employee, suggested the name change to Ridgefield, ‘on account of ridges nearby.’

Ridgefield became a thriving railroad community.  Train cars full of cattle came from the west and stopped here.  The animals were allowed to graze in nearby fields one last time before their final stop at Chicago’s Union Stockyards.  Another fledgling, destined-to-be iconic American business, Borden Dairy, maintained a large plant on the north side of town and also transported its products by trains to the City of Chicago.  The remains of the Borden building are still visible today.

At the turn of the century, Ridgefield ‘center’ had approximately seven commercial buildings.  Today, a small variety of retail businesses, including antiques shops The Country Church, Railroad Street Market, The Peacock Shoppe of Ridgefield, and Simon-Michele Antiques and Vintage still anchor the railroad crossing at what is now the intersection of Country Club Road, Depot Street and Ridgefield Road.

Ridgefield evolved as a significant railroad passenger stop over time, however, its importance as a commuter train depot diminished as people relied more on automobiles.  The last passenger train stopped here in the 1960s, but locomotive warning horns still sound, red lights still flash and crossing gates are still lowered as trains travel through the tiny hamlet; echoes of times past.

The Antique Shops of Ridgefield